A wonderful Letnet day at my allotment, a true proof of the wonder of Letnet – so many of you came and the place is completely transformed. Thank you so much to Mary, Gail, Hilarie, Athina and Jonathon, Catherine and Michael, Peter and Jack, – and me of course! Lots of ccs winging their way to everyone who came 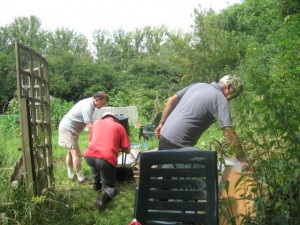 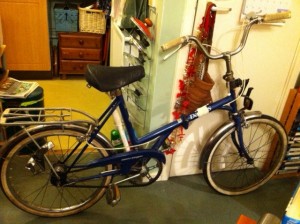 A number of bikes were advertised through Letnet  I went to get one and took away a folding bike.  I contacted another member to enquire about the ‘Men in Sheds’ project as I thought that cleaning up the bike and bringing it back to life might be a lovely project for them.  He was not sure but I took it along and met all these men and had a cuppa with them, and then they took the bike out of my car and I left it with them, without having any clear arrangement other than saying I would pay for any parts needed, such as new tires.

Lo and behold, on Sunday, my bike arrived for my tea party with my bike, which as can be seen from the photo, looks gleaming and wonderful and I am very grateful to everyone involved.  I did pay CC’s for the bike.  So I regard it as a real Letnet success story – it just shows you what is possible through Letnet and a bit of initiative! 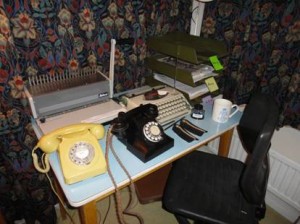 Another fun evening solving both foul treason and a dreadful murder was had by Let-netters; and others in the underground War Cabinet London bunker (as shown above – temporarily moved to leafy Buckinghamshire due to the incessant bombing).  A 3 course wartime menu was served in the NAAFI upon production of ration cards.

Our thanks to George (Letnet member) for organising this fun Letnet event.